Drought is the major natural disaster affecting the livelihood of Ethiopians, resulting in water insecurity which in turn causes disruption of livelihoods and loss of life. Yet, whilst emergency support is critical, it is also vitally important that sustainable and climate resilient WASH systems are being developed in water insecure areas to break the cycle of emergencies. UNICEF has prioritized the implementation of these resilient WASH programme by constructing multi-village water supply systems and through expansion of existing water sources.

UNICEF has introduced a new approach combining remote sensing, weighted GIS overlay analysis, hydrogeological mapping and geophysical surveying to increase the success rate of drilling and provide resilient water sources to communities. UNICEF is building on this success by expanding the scale of the works with an EU-funded project entitled “Improving Access to Safely Managed Water Supply in the Resilience Building Programme for Ethiopia RESET II Woredas”. The project covers 41 woredas in the 8 clusters or zones of the Amhara, Afar, Somali, Oromia and SNNPR regions. The 8 clusters are:

Within this framework UNICEF carried out the project “Groundwater mapping for climate resilient WASH in arid and semi-arid areas of Ethiopia”, abbreviated as GW4E, in the period from July 2018 to May 2020.

During Phase I the GW4E project created harmonized geological maps, groundwater suitability maps and socio-economic maps on a scale of 1:250,000 for the above-mentioned clusters. These were mainly based on existing maps, satellite data and well data acquired from public sources and supplied by the Central Statistical Agency, the Ministry of Water, Irrigation and Electricity (MoWIE) and the EU Joint Research Centre (JRC). The groundwater suitability maps were made by GIS overlay analysis of basic data using weighting factors defined by the GW4E Peer Review Committee during a special workshop. Fieldwork has been carried out to validate the maps.

In phase II zonal consultation meetings (ZCM) were held with local stakeholders comprising Regional and Zonal Water Bureaus, Woreda WASH departments, traditional leaders and NGO’s. Notably the NGO’s being the formal EU RESET II partners mediated the ZCM’s. During these ZCM’s stakeholders defined 10 priority kebeles and villages in each zone for project intervention. Apart from interpreting the GW4E maps stakeholders also considered the actual status of WASH systems, conflict areas and IDP areas. Out of the 10 priority kebeles defined during the ZCM’s, the GW4E consultant team selected two target kebeles or villages, where drilling was expected to be most successful. Around these kebeles and villages detailed geophysical surveys, water sampling and analyses and local water balance calculations were carried. This led eventually to the identification of drilling sites for the target kebele of villages. For each target kebele or village 2 additional spare sites were indicated. In total 48 sites have been identified (8 clusters, 2 target kebeles or villages in each cluster, 3 well sites for each target kebele or village). The GW4E team validated and marked all sites in the field in the presence of local stakeholders. For all target kebeles or villages 1:50,000 hydrogeological maps and 1:10,000 drilling maps were prepared.

All maps and well data gathered during the field work have been organized in an open source database structure and handed over to MoWIE. In addition, all documents, maps and data can be visualized and downloaded from a public webservice system, the GW4E viewer.

Training has been provided through on-the-job training in the field and in the GW4E office. A general training was held on remote sensing applications for groundwater by EU-JRC in March 2019. Finally, a training on the overall project methodology and overlay analysis by the GWE4E team on August 2019.

UNICEF formed a Peer Review Committee of experienced hydrogeologists and WASH experts for quality control on all project results.

The links below are meant for GIS professionals. They are provided to facilitate the construction of custom maps from the GW4E project layers.

If you need assistance in using web-based GIS services, please check the documentation for QGIS or ArcGIS.

The waterpoint data in “waterpoints MoWIE” in the page “Map Viewer” are provided by the Ministry of Water, Irrigation and Electricity of Ethiopia. These data have not been validated by the GW4E project. 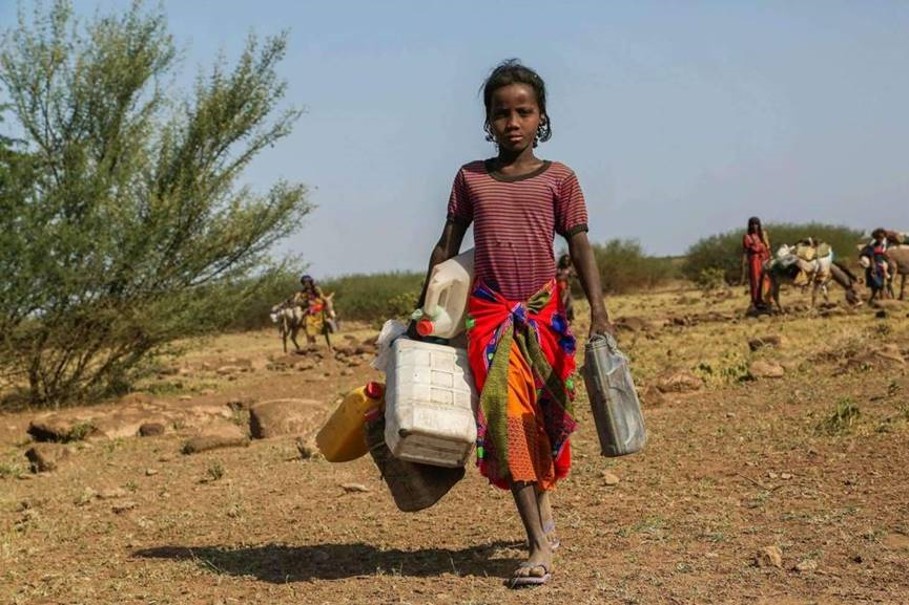